Two of the best books I’ve read this year were by Vietnamese-American authors. It wasn’t particularly intentional on my part, but I love it when I find unexpected connections in books that I read. The books are The Best We Could Do by Thi Bui and The Refugees by Viet Thanh Nguyen. In one sense they’re very different from one another – the first is a memoir in graphic novel format, and the second is a collection of short stories. Yet the two books complemented each other in interesting ways.

The Best We Could Do is a graphic memoir, in the tradition of Marjane Satrapi’s Persepolis or Nina Bunjevac’s Fatherland. The author herself arrived in the US as a toddler (after her family fled Vietnam), so the book centers more on her parents’ stories. In fact, the very process of her seeking to uncover her parents’ stories is woven into the narrative itself. We see the long, difficult conversations she had with her father, and the way her mother opened up more easily to the author’s Caucasian husband about her past than she could with her own daughter. We see her father’s childhood unfold, and then her mother’s. These two stories providing an interesting counterpoint to each other – the mother grew up in the social elite, attending French schools, and vowing never to give up her freedom and dreams by marrying or having children. The author’s father, on the other hand, grew up in poverty, abandoned by his father – a man who later tries to recruit him to the Communist cause. Seeing the history of Vietnam as a backdrop to these two very different childhoods provided an interesting glimpse into the varied experience of the Vietnamese people.

Another element of this book that stood out to me is how the author tells the story through the lens of motherhood. Pregnancy and birth is a sort of frame to the narrative. The book opens with a vivid scene of the author giving birth to her firstborn child, and we watch as she’s inundated with the questions and fears that often accompany motherhood. Her new understanding of both the significance and the difficulty of having a child leads her to investigate her own mother’s past with a particular focus on the experience of motherhood. As the story unfolds, she follows each of her mother’s pregnancies, set against a background of a changing country, often full of turmoil and unrest. The pregnancies are varied: there are stories of infant loss and stillbirth, stories of “replacement pregnancies” following the loss of children, stories of fleeing the country with an infant in arms and of giving birth in a refugee camp. There’s a poignancy to a woman realizing for the first time the intensity, meaning, and self-doubt of being a mother, and then seeking to interpret and understand her own mother’s past in light of this. 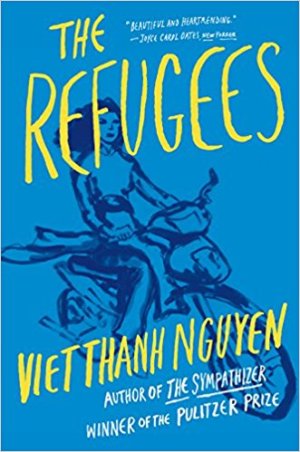 The Refugees served as both a complement and a counterpoint to The Best We Could Do. It’s a slim collection of short stories, much more understated and reserved than the graphic memoir. All of the stories relate in some way to the Vietnamese-American experience, yet there was an incredible amount of variety among the stories. The fact that the characters’ lives had a connection to Vietnam wasn’t presented as a dramatic or flashy thing – there was no sense of exoticism or melodramatic pity in these stories. Instead, we see a nuanced and often understated look into a few moments in these characters lives. It shattered the illusion of a single, monolithic “Vietnamese-American experience.”

Not all of the stories were about literal refugees. To me, the title seemed to refer more to the unmoored feeling of being between cultures – not fully belonging to one or the other. This unmoored feeling presented itself in very different ways depending on the personality and experiences of the character. The characters themselves are well drawn and they come to life on the page. We see the adult daughter who lives with her ghost-believing mother who finds herself haunted by the memory of the brother who died saving her life as they escaped from Vietnam. Or the Vietnamese girl who idolizes her half-sister living in America, until the sister comes to visit and reveals the complicated truth of her life in the States. There’s the retired USAF pilot who fought in the Vietnam War, now visiting his daughter who has chosen the life of a language teacher in Vietnam, as they hash out their conflicting views about the country his daughter now calls home. And we see the elderly librarian who questions her husband’s past when he begins to call her by another woman’s name as his Alzheimer’s worsens. Each character inhabits his or her own space, and reveals another facet of the story that connects Vietnam and America.

These two books stand beautifully in conjunction with each other. On the one hand, they have quite different ways of approaching the subject – The Best We Could Do with its striking visuals and deeply personal autobiographical story, and The Refugees with its thoughtful and nuanced portrayal of a multiplicity of different experiences among Vietnamese-Americans. Yet they both delve deep into the same subject matter – the lives of people who have become Americans due in large part to the Vietnam War. The war is an ever present thread weaving throughout both books, but it’s not often the main focus of the narrative in either book. Instead, these books focus on the personal journeys of Vietnamese and Vietnamese-American individuals – their joys and their struggles, and the way Vietnamese and American culture rub up against each other in their lives. Both books are beautifully written, and the experience of reading them side by side deepened my understanding and connection to these stories and experiences.

3 thoughts on “Vietnamese-American Stories: The Best We Could Do and The Refugees”

Thoughtful reviews of books for all ages